When you watch documentaries about the Great Wildebeest migration of the Serengeti you’ll be forgiven for thinking that it is an event that takes place around the crossing of the great River Mara and for good reason. The image of thousands of Wildebeest and Zebra fighting against strong currents as they cross the river, single file, in search of greener pastures with hungry crocodiles waiting patiently on either side of them to pick off the weakest of the lot makes for high octane viewing. Contrary to popular belief though, the Wildebeest migration is actually a year-long spectacle featuring over 2 million Wildebeest and their fellow herbivores ploughing in clockwork direction around the ecosystem of the Serengeti.

While the Mara River Crossing occurs in Northern Serengeti between the months of August and October, a lesser known spectacle occurs between January and February (wildebeest aren’t known for sticking strictly to calendar dates!) referred to locally as the Calving Season. A sixth sense of sorts lets the Wildebeest know when the rains in Southern Serengeti have started, and upon gleaning this knowledge they head to and come to a halt in an area known as “Ndutu”, the stretch of land between the Serengeti and the Ngorongoro. It is at this time, with the fertile volcanic grasslands providing a generous amount of nutrition for pregnant mothers, that they give birth.

The sight is one to behold. If you spend an average day in Ndutu during the calving season you could witness over a thousand births. The magnificence of it all is on show when you see how within minutes infant Wildebeest will have learnt how to walk.

Keeping a keen carnivorous eye on proceedings will be the predators, lionesses chief amongst them. Displaying a sense of cruelty only nature can get away with, they’ll be on the prowl for the weaker of the newly born, whose inexperience will make them susceptible as prey, or the mothers having just given birth, whose injuries in turn making them vulnerable.

The Wildebeest are known to be in the Ndutu area for almost 3 months, before heading to Western Serengeti, where they will all gather before venturing north once more, completing the cycle they had initially started. The Calving season only lasts a few weeks, making it one of the most memorable events for those that get to witness it. Due to its timing not coinciding with the traditional travel seasons, namely the summer and Christmas holidays, and the general misconception of the Great Migration and of its association being uniquely with the Mara River Crossing, the calving season in Ndutu often gets overlooked. It is a pity though, because those that witness it swear that it may well usurp the River Crossing as the Serengeti’s Holy Grail! 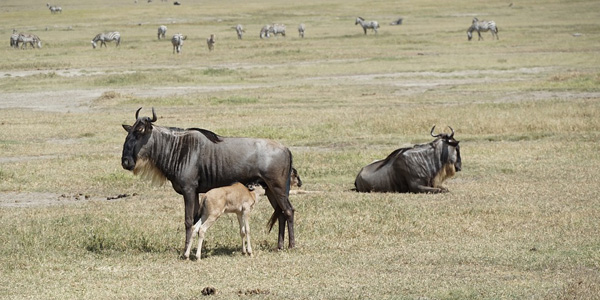